Shameen Thakur Rajbansi was born in 1964 in Durban (King Edward VIII Hospital). Her Father the Late Thakur was a maths, science and English teacher. Her mum, Mrs Thakur, was a housewife. They lived in Newcastle. Shameen is the oldest of six daughters. She excelled at debating from the age of 12. She attended the SE Vawda Primary School in the 70’s. Shameen was the head girl of St Oswald’s High School in 1982. She also won the Most Promising Student award in matric. Other accolades included the Jan Hoffmeyer Freedom and Incandu Jaycees orators and debates trophies, together with the Chetty Shield. Not surprising, and needless to say, she had chosen debate topics that were political in nature, accentuating her perspective against Apartheid. She was also sensitised to her Indian Indentured roots by her grandfather, the Late Mr.K.Thakur. He worked in the Burnside Mines and became blind due to fine dust from mining and the lack of protective workwear. Her grandfather did not see his grandchildren. This was painful for Shameen, who today is a strong activist for Workplace Occupational Health and Safety. She was only 15 when she and her school friend were made to follow separate lines in Wimpy in Ladysmith. Furthermore, winter cold of Northern Natal, to wait for fried chips. Only Whites could sit inside and eat. This racist discrimination embedded in her mind the need to fight for justice.

Shameen also excelled in sports, such as gymnastics, ballet, long jump and tennis. She received a silver medal in 1972 for ballet. The tragic loss of her dad in a shooting at a local shop left her devastated. She was 17 years old when she started studying at University of Durban Westville (UDW). Having 5 younger siblings toughened her quickly. She qualified as a pharmacist in 1986 and completed her internship at Ladysmith Provincial Hospital. She thereafter established Eastbury Pharmacy in Phoenix. Whilst providing much needed services to this community for 20 years, she lost her first child when he was only six weeks old. Her second son was born in 1991 and was diagnosed with Addison’s disease. Before her toddler turned 2, Shameen’s husband, a school teacher passed away. She was suddenly hurled into a tidal wave, being a young mother, a widow and being surrounded by sub-standard health and schooling services. What does it take to be an entrepreneur amidst adversity? Being an entrepreneur on its own has its fair set of challenges. Being and entrepreneur combined with being a single mum with a sick child must have been traumatic. How does one wake up every morning after losing a spouse and go about business as usual? This required amazing strength and tenacity.

Amidst this whirlwind, she managed to work and still find time to study and work with local organisations on a voluntary basis. Juggling so many balls in the air concurrently requires immense time-management.
Whilst marketing Reeva Foreman’s cosmetic range from her pharmacy, she offered young brides in the previously disadvantaged area of Phoenix free make-up as a voluntary service. Her passion for community involvement was stimulated. She also sponsored many 5km races, supported by pharmaceuticals to engage the community in active and healthy lifestyles. Some of these were done to fundraise for NGO’s.

When the “Sugars” drug addiction phenomenon first emerged, Shameen was the first “Drug-Wise” counsellor to take several young adolescents under her wing.

Amidst the changing face of South Africa was an eagerness and hopefulness like never before, as it propelled into Democracy. Shameen realised that there were grassroots issues that the Minority Front, the political party that represented Indians, needed to assist members of the community with. Shameen joined the Minority Front in 1998 and was elected the chairperson of the Women’s League of the party. Thereafter, she was elected to the KZN Legislature for five consecutive terms (1999 to 2019) and has served on numerous portfolio committees such as Health, Education, Social Development, Conservation and Public Participation and Petitions.

In 2001 Shameen married the founder and leader of the Minority Front, Mr Amichand Rajbansi. She gained tremendous incite from his leadership until his passing in 2011. She had sold her pharmacy in 2010 to be involved in politics full time. She also had to endure tremendous turbulence in spite of a three-year court battle as a result of internal party politics. In 2013 she became the leader of the Minority Front arising out of a court ruling in her favour. This position has been retained.

She continued to study, research and constantly stayed relevant. Her dad’s words were always at the forefront, guiding her: “a girl’s education is her only weapon”. In 2010 she completed an MBA through UKZN and received the Golden Key Award. In 2015 she also completed a diploma in Governance and Leadership at Wits and was the top student. In 2019 Shameen completed Gender Studies at ICPS in Westminster, London whilst being brave enough to undertake another Masters study in Public Management at Wits University, which she completed in 2020. Her research focused on the following issues: “To assess patient safety culture in Maternal Obstetric Units in the UMgungundlovu District“(2020); “The impact of new medicine pricing regulations on Independent Community Pharmacies: A Kwa-Zulu Natal Study” (2010); “Violence against Women in Politics: A Workplace Policy” and “Gender Equity Strategy for members of the Kwa-Zulu Natal Legislature” (2019).

Shameen has been selfless in her strive to improve the quality of life for the disadvantaged. She has received several community and global awards for her contribution to political, social and cultural upliftment, as well as philanthropy. Amongst these some of the following are:

Shameen started her political career whilst still a youth when being involved in politics was still considered as being a male dominated arena. However, she has weathered the storm.

Shameen was unstoppable! Like the way Mother Theresa didn’t need anyone to flank and support her, this young lady forged ahead. Nothing was intimidating or formidable. Her role in the KZN Legislature as a legislator is significant and laudable. She was instrumental in the change in the Means Test for grantees (housing); establishment of a Tribunal in 2008 to deal with grant backlog appeals; a hospital child abandonment policy; medico-legal changes in status of mortuaries from SAPS to Health; change of the nutrition programme from Health to Education; preservation and promotion of eastern languages and culture; initiating investment in Early Childhood Development (ECD) Programmes since 2004; introduction of HPV vaccination for the girl-child (2009); the introduction of sanitary pads in schools (2018); the growth of community widow support groups and significant changes for the LGBT community.

Shameen’s message to other women: The one affirmation all women should live by is “Where would the world be without women” by J.P. Vasvani. This inspires me daily to face the world and its challenges. Only women have been divinely gifted with the extraordinary skill of multi-tasking. However, as mothers’ we have to transform gender roles and teach these to our son’s too. We need to close the gaps to gender inequality by 2030, so women have to support women by co-operating instead of competing, as there is strength in Unity.

Mrs Shameen Thakur-Rajbansi was born on 17 November 1964, in Durban. 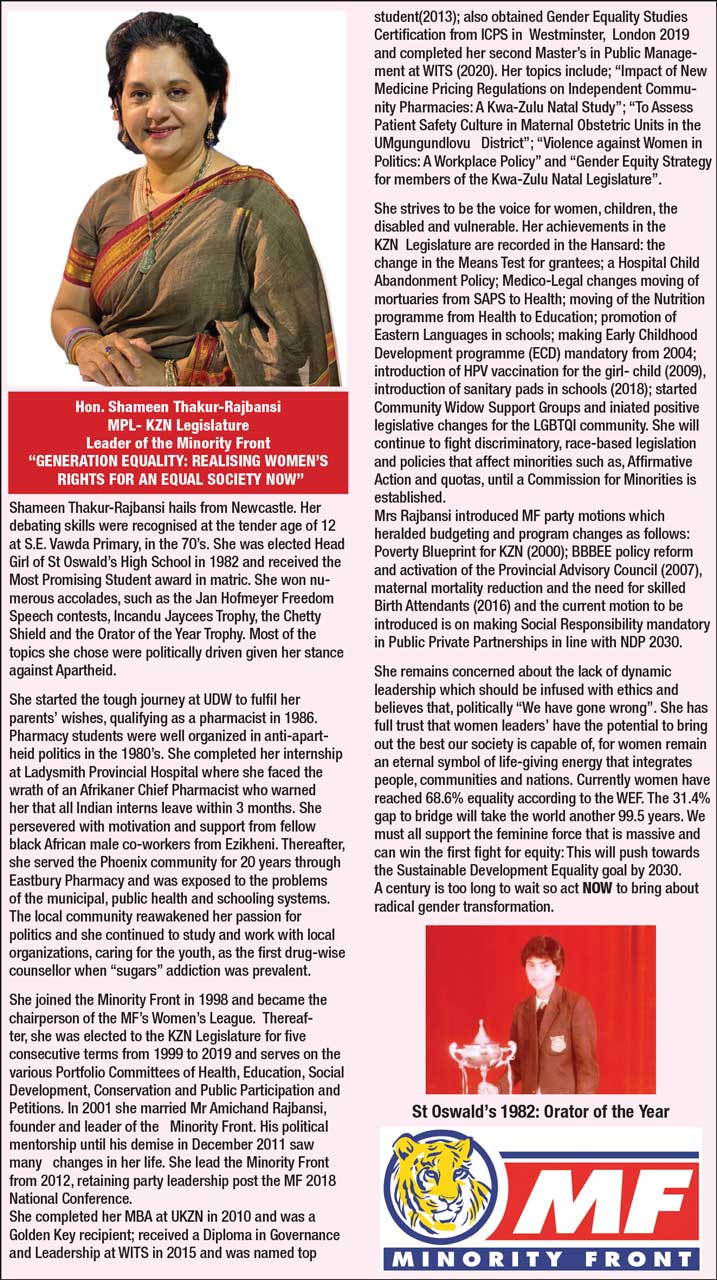