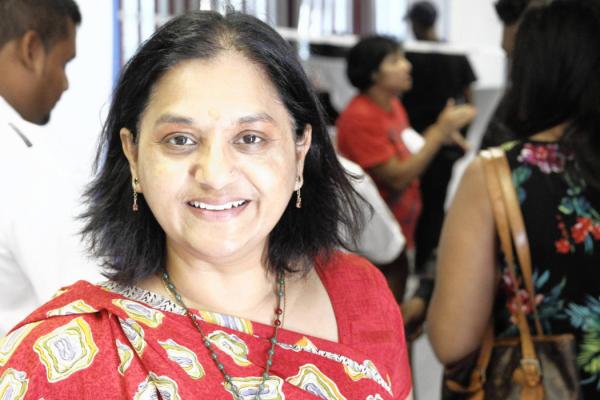 To our invited speakers, the media, guests, family and friends.

Today, is yet another milestone for the Minority Front, which turns 23 years old, this year. A silver jubilee is on the horizon in 2018. It also marks 5 years of the passing of our founder and leader, Mr Amichand Rajbansi. We who remain, have not let him or his legacy down. Against all odds we have fought to survive politically, so that Minority rights becomes entrenched in South Africa.

I take this opportunity to thank organisations like DDP and even the Councils and Parliament for training programmes to empower us as public representatives.

Before you today, are a group of dedicated loyal men and women who are prepared to serve you in the Ethekwini Municipality come August the 3rd.

In your media packs are many documents, please read these as they include my CV, the MF 2016 Manifesto, candidates flyers, MF Strategic Plan, Executive Summary and my Key-note Address, amongst others.

I will highlight certain areas though, for the Minority Front’s plan for this council term.

Today, some have opened new parties, others have hopped to other parties, but all on the Minority Front’s strength. The Minority Front has been robbed of approximately R2,4 million due to loss of five by-elections and non-accounting for the municipal councillor allowance fund in Ethekwini. Two councillors have been charged.

Currently all 7 councillors membership has been terminated in the Ethekwini council except our last remaining loyalist Cllr M Dasarath, who will be the only person sitting on the MF benches which had 11 seats in 2011, however we hope that by Monday three more new members will be in the council and at least the Minority Front will have four loyalists in our benches for the last council meeting on the 22nd June 2016, at City Hall.

Councillors who have left us are so greedy that although they now belong to other parties and the MF has terminated their membership because the MF does not allow dual membership, they still want me to keep them on so that they can get their last 2 months salary and a bonus of another 3 months. So the Minority Front money is good but to sell out Mr Rajbansi’s legacy does not hurt their conscious if they have one. You are the media, you are the voter. Decide what is ethical and what is not.

However, I am still standing strong no matter what anyone has done to me and today once again I pledge on behalf of the Minority Front we will abide by the IEC code of conduct for this election. Our voters will understand that we do not have money to do many things in this election that we used to do such as have tents, taxi’s paid volunteers, party agents and so many other things for voters on Election Day, but please bear with us for this election because we will recover from this situation with honest members in the new council.

One thing every voter must remember is that these people can steal almost everything from the Minority Front but they will not rob us of our strength and of our tiger logo on both the ballot papers on August the 3rd. Tell each one that your vote will be for Mr Rajbansi’s legacy the MF that he left to protect you, the minorities. Show these disloyal people that you will put your cross where the Minority Front logo appears. This must be the golden lesson by all loyal voters and for those voters who have been misled previously.

Our key issues for the council is focused on the fight on corruption; the harnessing of renewable energy; the accountability of councillors and municipal leadership; equal service delivery to all areas; promotion of land ownership; promotion of business development; active policing and the recognition of cultural rights for social cohesion. Housing is a burning issue for minorities and minorities must be demographically allocated housing at a local level.

A detailed plan to save our municipalities is outlined and my executive summary in the media pack. Also all documents will also be available on the Minority Front website. It is for the media to ask whatever questions they feel important, as I am prepared to answer them. Please note that the IEC timetable of key dates and deadlines is out, so watch the media for more news about the Minority Front.

Finally, I want to end by saying, that our born-free youth are being treated as half citizens and not full citizens. The best weapon for them to use is to read every page of our South African Constitution of 1996 and form pressure groups based on clauses of different parts of the Constitution that will prepare them for a brighter future in South Africa and make an active citizenry a reality to co-govern.

Thank you all very much for giving me this opportunity and attending our launch. An MF election calendar will be forwarded to all media.